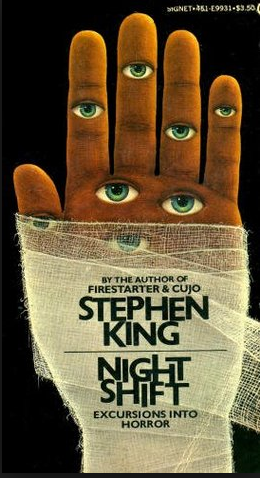 Have you ever wanted to quit a bad habit? Of course, you have. Maybe you drink too much. Maybe you smoke too much and walking up the stairs makes your heart hurt in a way in never used to. Maybe you gained a few pounds over the years because those pastries at the local cafe were just too hard to resist.

Whatever your bad habit is, all you need to do is visit Quitters Inc. They guarantee results. They have a 98 percent success rate, don’t you know? Just sign this contract here, show up at your next appointment and treatment will begin. They use aversion therapy and it’s very effective.

The whole premise of this story is genius. Clever and written wonderfully as Stephen King consistently does.

Dick Morrison runs into an old friend, Jimmy McCann. Jimmy looks great, he’s a big deal at his work and he’s quit smoking. Sucking on his own cigarette, Dick is happy for Jimmy but also jealous and resentful in the way that people can be when someone succeeds at something they have failed at. How did Jimmy do it?

Quitters Inc., that’s how. No, he can’t talk about their treatment.  He signed a contract and he is not allowed to disclose what they did to help him. No, they don’t advertise. They obtain their business by word of mouth. Here’s their card if you’re serious about quitting. They changed his life. Dick takes the card and puts it in his wallet. He forgets about it until it falls out a month later while he is a bar, drinking, smoking and not liking his life.

He goes to Quitters Inc. He signs the contract. He shows up at his next-day follow-up appointment. He shakes the hand of Mr. Donetti and that seals the deal. The treatment has begun.

Dick only slips up once. And after they show him what they did to his wife, once was enough. He quits. He’s happier. He gets a promotion at work. Things are looking up.

After a person quits smoking, it is common for them to gain weight. They have to put something in their mouth and if it isn’t a cigarette, it usually ends up being food.

Dick wasn’t smoking anymore, but he was gaining weight. He then enters phase two of the treatment. He is weighted once a month. If he goes over a certain amount, his wife loses a finger.

Would this work? What makes this story clever to me is that the people you love get directly punished for your actions. This is what makes it work.

What would you do to spare someone you love pain? What if your deliberate actions would result in the pain of your partner? Your child?

Self-destructive behavior does hurt the people you love but not in a direct, physical way. It is in the abstract that they are hurt by your smoking, drinking or whatever because they care for you. But what if your actions affected them in an immediate, painful physical way? I would say even the most callous person would change their behavior.

Now, I’m trying not to spoil these stories if you haven’t read them so I’m deliberately leaving a lot of points to this story out. In saying that, do yourself a favor and read it. It is a good study on understanding human motivations and manipulation.

The Ancient Romans, starting with the Appian Way (Via Appia) built approximately 50,000 miles of hard-surface roads throughout their empire. The roads were straight and cambered so that the water would drain away from the surface. They also used concrete made from volcanic ash and lime. Their roads still survive to this day.

Along these roads, you would find something similar to what you would see on a highway today. The Romans placed stone mile markers for every Roman mile (1,476 meters). On these stones would be the number of the mile depending on what road it was on. Why should you care? I don’t know. I like it because it would be the first time in history where you could place yourself at a physical point in the world by using these markers. You could be, where am I? Oh, it says here that I am a mile out from the next trading station near Pompeii. How cool is that? Evidently, it was so cool that we still use those points of reference today on our own roads. Thanks, Rome!

Check out my books here friends!

Newest book available for preorder, Off the Grid!

Movies of the Damned!!

Have a great week. Be kind to everyone!