Anyone remember this John Hughes gem? The same guy that brought us, Uncle Buck, Home Alone, Sixteen Candles and countless other fun films?

This film was… different. Two unpopular, lonely, high school boys create what they think is the ideal woman using a computer program, a Barbie Doll, some Frankenstein-esque lightning sequences and, of course, while wearing bras on their heads. She shows them the error of their ways using ‘teaching moments’.

Weird right? An accurate title for sure. I liked this movie. I don’t know how it would hold up to today’s standards, but I thought it was a fun film infused with imagination. Like when the older brother Chet (Bill Paxton as below) is turned into a giant turd by the Uber Woman, Kelly Brock.

And then there are the high school cool kids coercing our lovable nerds into making them an ideal woman… one of them played by a young Robert Downey Jr.!

Look at how young he is!

Anyway, if you haven’t seen it, give it a try. There are some really great scenes. Like the one where they have this big party and it is crashed by…wait, you should check it out yourself. If you’re an 80’s film fan, you’ll really enjoy it.

Bathhouses were a popular place for any citizen, poor or rich, of Rome to spend the afternoon. Adopted from the Greek practice, the Romans once again took an idea and expanded upon it. They built lavish bathhouses where men, women, and slaves would go to once the workday finished.

The bathhouses had warm heated pools and cool ones to dip into. They had gyms for exercise, booths that sold food and other products as well as reading rooms with books. The Ancient Roman bathhouses were the community centers of the ancient world. They were very popular and as such, they were built lavishly. Below is an example of a bathhouse. This one had been built in England and can still be visited today. 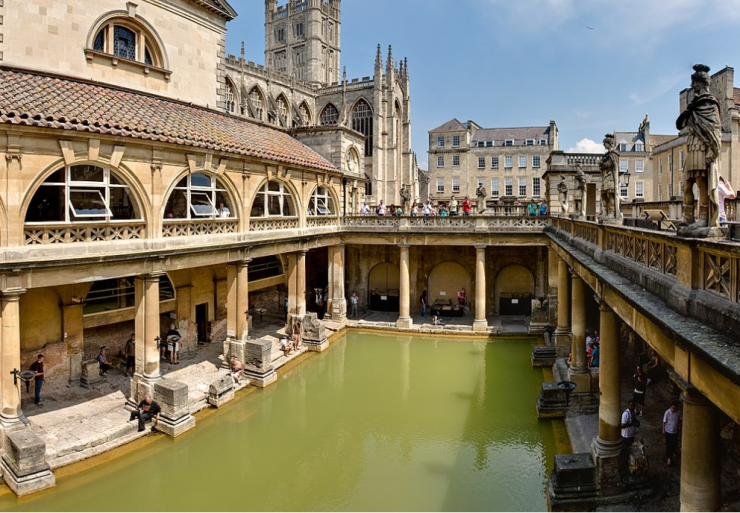 These places got filthy though. It wasn’t recommended to visit a bathhouse if one had an open wound. Gangrene was a very real probability. Ouch.

The newest book is now available for preorder, Off the Grid!

Podcast:  Movies of the Damned!!