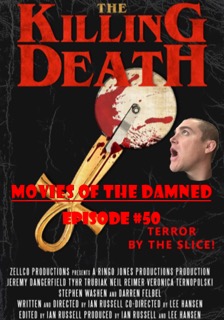 This movie has an interesting premise; to create the ultimate pizza topped with human body parts! A meat lover’s delight! So yeah, it’s a comedy horror and did the fine people pull it off? Listen in (with guest host, the boy!) and find out:

Podcast:  Movies of the Damned!!

The Roman legionaries carried a javelin (Pilum). As they were closing with the enemy, they’d hurl the javelin at the enemy. Now, you’re probably thinking, well, why didn’t the enemy just throw them back? If it didn’t get anyone, why wouldn’t they pick up the javelin and use it against the Romans?

Well, because the Romans made the head of the javelin out of soft metal. If it went into a person, it would be tough to pull out and the head would be damaged and blunted. It would diminish its use. If it went through a shield, the metal would bend and the shaft would drag on the ground. The enemy wouldn’t be able to remove it and it would render their shield useless.

The newest book is now available for preorder, Off the Grid!